WHAM!  My husband slammed a book down on the tile floor, smashing the spider that he and my son had been studying.

“Da-ad,” my son whined, “I wasn’t done looking at him!”  He set his jaw and crossed his arms, getting into that huffed up position he assumes when things don’t go his way.

“Oh, sorry, Buddy,” my husband stammered.  “I thought you said you were done. You can still look at him.”  I could tell he was trying to figure out how to keep this from escalating.  Suddenly he got a twinkle in his eye.  Winking at me, he said to my son, “Go get a paper plate.”

My son looked confused, but fetched the plate as directed.  My husband scooped the spider up and set the plate on the table.  “Want to eat him?” he asked my son.

“EWWW!” my son squealed, forgetting he was upset.

“First we need to put some salt and pepper on him,” my husband continued.  He handed the shakers to my son, who was now totally engrossed in this new project. Buddy Boy shook salt and pepper over the smashed exoskeleton, laughing.

“How about some soy sauce?” my son suggested.

“In a little while, we’ve got to let him dry out with the salt and pepper first.”

“Are we really going to eat it?”

“You know, I’ve eaten grasshoppers before,” I chimed in.  My son looked skeptical.  “Once I ate a chocolate covered grasshopper to get a free ice cream, and another time I ate spicy grasshoppers at a Oaxacan Restaurant.”

An hour and a half later we were on our way home, and as usual I asked what everyone wanted for lunch.  “I feel like a grilled cheese sandwich, who else wants one?” I asked.

“We’re going to eat the spider,” my husband reminded me.

“Dad, you can eat the spider,” my son piped up. “I might die if I eat it.”  I glanced at him in the rearview mirror.  He had a genuinely worried look on his face as he contemplated eating the spider.  I wondered if it was time to tell him we were just kidding around.

My husband wasn’t quite done with the joke yet, though.  “Oh, no, we’re going to share it.  Spiders have eight legs, so you can eat four and I can have four.  Or should we share with Mommy, too?”

“But what if we die?” Buddy Boy asked earnestly.  I could tell he was getting pretty nervous, and so could my husband.

“I’m just joking,” he said, smiling at my son in the rearview mirror. “We’re not going to eat the spider, I was just playing with you.”

A look of relief washed across my son’s face.  Knowing he didn’t have to eat the spider brought him back into the excitement from earlier in the morning.  “Can I put butter on him?” he asked.

I laughed. “Yes, I’m joking,” I said, setting his sandwich down on the table in front of him.  “But you know what, that would make a great story!” I continued, the writing coach in me coming out.  “You should write a story about how to cook a spider at preschool tomorrow!”

And that’s just what he did.  When we went to pick him up, his teacher told us about the great story he wrote, and how much the whole class loved it when she read it at circle time.  That’s my boy!

Spring has arrived in full-force.  The signs are everywhere: daffodils and tulips have come and are starting to fade, the cherry trees in front of our house exploded in pink blossoms that have started to fall to the ground like pale pink snowflakes, and the sun is still shining where the kids’ bedtime sneaks up on us.  The weather has been pretty glorious over the past few weeks, which means the kids and I have spent a lot of time outside digging in the dirt–me digging up weeds and planting seeds; my son digging for worms and bugs; the baby girls alternately digging, flinging, or tasting the different types of dirt around our yard.

This year, while digging, we’ve come across several hard-shell insect pupas burried in the dirt (moth cocoons I learned from a quick Google search). 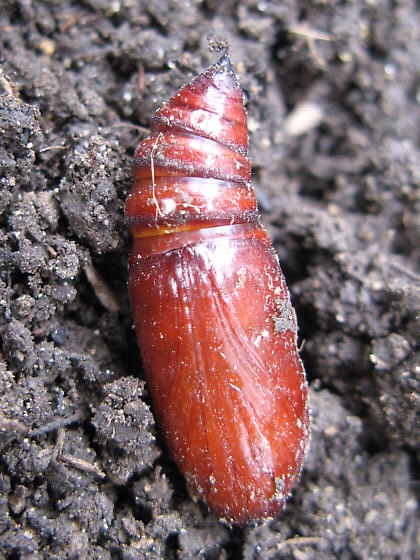 “Hey, Buddy, here’s another one of those cocoons,” I called across the yard.  My son came running and bent over to see the dark-red cocoon resting on my garden glove.  When I touched it with a bare finger, the pointy end wiggled and squirmed, assuring us there was something alive inside.

“Put it on my shovel,” he said, not ready to touch it with his bare hands quite yet.  He slowly carried his new treasure over to the bench for further investigation.  My focus returned to the spot I was weeding.  Out of the corner of my eye I kept tabs on where each of the girls were playing.  They adore their brother and always want to see what he’s doing, so I didn’t think anything about it when Baby Girl B wandered over to the bench where my son was playing with the pupa.

A few seconds later I heard my son call out,  “No, Baby, NO!”  I dropped my shovel and sprinted the twenty feet to the bench, expecting to see him trying to pry the cocoon out of Baby Girl’s hand.  But instead he was just staring at her in disbelief.  Her hands were empty.

“What did she…” I started to ask, and then something about the look on Baby Girl’s face told me what happened.  “Did you eat it?” I asked, dropping to my knees, and tried to stick my soil-stained finger in her mouth.  Her lips parted just slightly, and I caught a glimpse of something dark red and shiny.

“Give it to Momma,” I crooned, squeezing her cheecks to try and force her mouth open.  I managed to get my finger in her mouth and felt it in there, but she still didn’t want to spit it out.  “Come on, Baby, it’s yucky.  Not for eating.  Let me have it.”

I don’t know if it was the taste of the pupa or my dirty finger, but Baby Girl suddenly decided to spit it out into my hand.  Amazingly it was only a little squished, not totally mashed up as I was expecting it to be.  I put it on the bench by my son. He poked it with his finger.  Nothing.  “Definitely dead,” he announced.

Dirt I can handle.  I figure eating a little dirt is good for the immune system.  But I draw the line at moth pupa.  That, I have to agree, is gross!

It all started on Sunday when we went for a “hike” in the wooded park behind our church.  As we crossed over the wooden bridge above the creek, my husband joked, “Watch out for the troll underneath!”

“Daddy, don’t say that!” my four-year-old son responded in a voice that says he is 80% sure trolls are not real, but 20% afraid that they are.  “Trolls are not even real,” he adds,  reassuring himself.

“Actually, there is a troll that lives in Seattle,” I chimed in.  “He lives in Fremont, under the Aurora Bridge.”

Our son stared at us with big eyes, not sure if he should believe us or not. “We’ll go see him this week while I’m on spring break,” I told him.

Flashforward two days, to my husband pulling into an empty spot along Troll Ave under the Aurora Bridge.  The Baby Girls were babbling away, excited to be going anywhere.  “Where is he, Mama?  I don’t see him!” my son said, craning his head in all directions, looking for the troll.

“He’s behind us, up the hill,” my husband informed him.  We piled out of the car, loaded the girls up in their stroller, and started up the hill.  About a block away, the massive head, big blue eye, and VW Beetle clutched in the long creepy fingers of the Freemont Troll came into view. 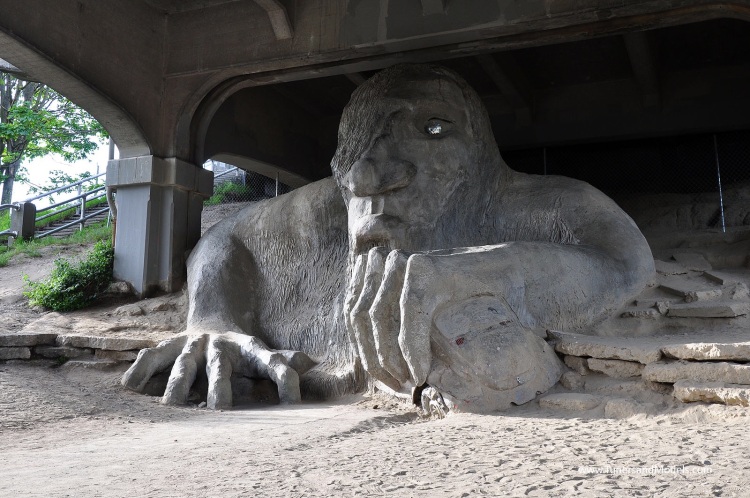 “Is that him?  I see him!” my son said, but instead of running ahead like he often does, he stayed right by our side as we approached the famous landmark.

He shook his head.

“Go see if he has boogers in his nose!” I joked.

“You!” He shot back, holding onto my husband’s hand.

I obligingly walked underneath the giant’s nose and peered up.  “Yep, he definitely has boogers!” I called back.  I headed back over and fished the camera out of the diaper bag.  “Let me take your picture with the troll, Bubby.  Daddy, too,” I added, noting the look on his face that said he wasn’t going over there by himself.

I snapped a picture of the two of them with the troll, and then we headed down the hill towards the shops and waterway of Fremont.  About halfway down the hill, my son turned to me and said in a confident voice, “Can we go back?  I want to take a picture on the troll’s hand!”

“That’s right,” I said.  “Nothing to be afraid of.”  And with that, my little boy got a little bit bigger and more confident of the world around him.